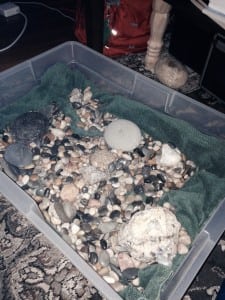 in vermont, there’s a saying: “dumber than a box o’ rocks”. this box o’ rocks is brilliant!

Standing desks are all the rage, and we love ours. Recently I’ve seen several Kickstarter campaigns for standing desk toys – things to stand on so that you’re not just standing on a flat boring surface. Flat boring surfaces are easy to vacuum, but they’re not so good for your feet. The feet are extremely neurologically sensitive, and they crave input! Not to mention that standing on flat boring surfaces allows your body to get locked into one position, which is really no better than if you were sitting. I’ve been following the development of some standing desk toys, but they’re fairly pricey, so we came up with a much cheaper alternative: The Box O’ Rocks! 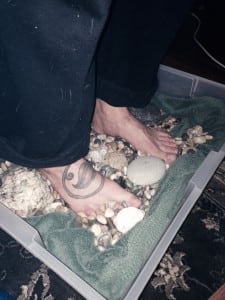 I found a plastic bin the basement that was big enough for me to stand in, with wiggle room. I had a bunch of various sized rocks – little ones for gardening, and various larger sizes that I’d collected over the years from river bottoms and hiking trails and beaches and wherever. I also had an old green bathtowel that I used to line the bottom, and to take the place of moss. (I’d love to have actual moss in there, but I’m afraid of what the cats and dog would do…) Put it all together and presto! An endlessly amusing standing desk toy! When I get sick of standing one way, I spread the rocks around with my toes and stand differently. When I want to stretch my calves, I push one of the larger rocks around until I can use it to stretch against. The different types of rocks give different tactile sensations – there are some rough ones, some quartz, some smooth ones – and the wide range of sizes also provides texture variation. 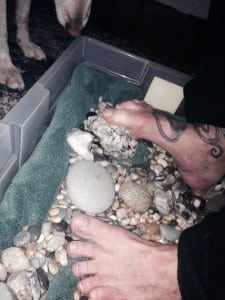 When the snow melts, I’d like to find a few sturdy sticks to put in there as well, though I have a feeling the dog may try to steal away with them. I’ll probably try it anyway, because bark would give a whole different texture snack to my toes!

The total cost of this contraption was zero dollars, given that I had all the materials already. If you didn’t have the materials, you can buy them for about $20. Much cheaper than the Topo, and infinitely reconfigurable! 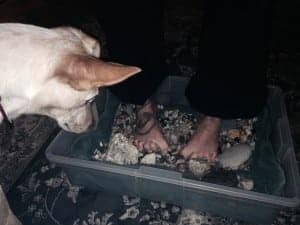 Posted in article and tagged alignment