We are a culture of More.
We like words like SuperSize, Maximize, and Fullest Potential.
We like, whether we admit it or not, concepts like Planned Obsolescence, because it allows for words like New, Shiny, Improved, and of course, Shopping.
We believe things like “You can never be too rich, or too thin”.
We, as a culture, have turned “for a rainy day” into the fine art of Stockpiling. Extra of our Extra, for a just in case several steps after just in case.

We are not enamored of the word Enough. It reminds us of words like Sacrifice, as well as Old and Used, none of which are terribly popular. Enough implies concepts like Making Do, and Less, which are in direct conflict with More. Enough makes us think we’re Settling, and of course we all were taught in school that you Never Settle for Second Best.

I grew up here. I learned the lessons of More. Better. New and Improved. When I bought a house, everyone said: you should buy the most house you can afford, even if you have to stretch for it, because then it will be worth more. And I guess that sounded rational at the time, because that’s what I did, and it was a stretch, to be sure. Of course, even better is getting More for less – less cost, less sacrifice. Get More than you pay for! Why pay more? It’s everywhere, it’s embedded in the consciousness of growing up in America.

Having More is a problem, because frankly, there are already enough Things in the world for everyone to have far more than they need, if we could just distribute and share and circulate. Instead, we keep making more, because Having More is the goal (followed right immediately by Having New). And of course, Having More means working more so that you can pay for More. It means stressing more about how to acquire More, and about where to put More when you have it, and how to protect More from other people who, despicably, have less and want More. Having More is more important than having Durable, or having Quality – those things don’t count, if you don’t have More.

But the thing is, More is insidious. Living in a culture of More means not only Having More, but Being More. Being More means that inherently, there is something wrong with us. Inherently, we’re not good enough. We must Be More! As if the stress of Acquiring More wasn’t enough, we must also Achieve More. It’s not enough to work an honest job and then go home and relax: we all need to be executive – that’s where the respect is. That’s More. If we’re not there yet, we need to keep working, keep Achieving, until we get there, or get as close to there as our talents can take us. Which is the American Dream, right? If you work hard enough, you can be anything. You can be More.

The time between now and when we will Be More is tricky, because the concept of More means we can never be Satisfied – which is painful! We compare ourselves against people who have More, people who have Achieved More, than we have, and we judge ourselves. We feel disappointment, maybe we feel shame, or guilt, because we haven’t Achieved More yet, or because we know we aren’t capable of it. In many cases we feed ourselves More to feel better – More Snackfood, More Cake, More Dunkin’s. Or we shop ourselves to feel better – More Shoes, More Purses, More Electronics.

The thing is, all that disappointment is a construct that isn’t real. It’s something that we created, we bought in to. The whole concept of More is not requisite. Much like in the 80s when everyone collectively agreed to believe that “fat makes you fat” and started drinking skim milk – fat doesn’t make you fat, sugar makes you fat. And what is skim milk? White sugar water. But because we all agreed to believe it, sales of skim milk (once reserved for fattening pigs a couple weeks before slaughter) skyrocketed.

Much like the realization that fat doesn’t in fact make you fat, there is an undercurrent of awareness building now that More doesn’t make you Happy. More is a monster who is always hungry – you can never be satisfied, because always there is More. But there’s an alternative to that: Enough. We could set aside our disdain and consider this concept, Enough. What would that look like? 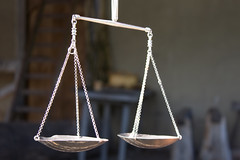 When we have Enough, we find Balance.

I was born into over-achieving. It’s difficult to stop, it’s like a drug. I was born into the burgeoning of “for a rainy day”, and that is difficult to stop. But a few years ago, someone was talking to me about the concept of Enough, and these ideas, combined with the coming-of-age realization that More doesn’t make you Happy, are the guiding principles of how I am approaching the rest of my life.

The idea of Enough is fairly simple. It involves a different kind of planning – instead of Planned Obsolescence, it’s a planned stopping point. It’s sitting down and saying, this is what I think I need, this is what will be Enough. You can get really nitty-gritty about it if you like: I need a large frying pan, a small frying pan, and three saucepans. I need a small soup pot and a large soup pot. I need a kettle for hot water… It’s ok to make a list of all the things you need! But you only need what you really need. We want so many things, we want so many extra things, and I believe it’s because we’re all acutely aware that we are not connected, that we can’t rely on our neighbors for help, and we no longer know how to rely on the Earth for help. And because we’re all aware, deep down, that we don’t know how to make things for ourselves: if we run out, we’re in trouble, because we can’t provide for ourselves. And so we Stockpile. When you’re deciding what is Enough, some Extra is ok. But guard against too much Extra, relying instead on things that are Durable, and on developing Community and true Self-reliance.

It’s also ok to want some things, but it’s important to want Enough, and not More. Maybe you say, I want knitting things and music things, and I would like some drawing things. Oh, you could also want so many other fun things! But maybe that’s enough things to want. Because of course, the concept of Enough contains in it time, as well. Do you really have enough time to have fifteen hobbies? What about Enough Sleep, and Enough Time in Nature? You need to budget time for that too. So when you’re listing your wants, remember to just pick your favorites. Besides, you can always swap them out over time. You don’t need to have everything you’ll ever want right now already.

In these first two exercises, the concept of Enough is really about scaling down. But the next exercise is the opposite – it’s about filling in the deficiencies inherent in the More culture: Enough time for friends. Enough time to take a walk. Enough time to express gratitude. Enough time to sit quietly. Enough time to be near a tree. Enough time to rest. None of these things require you to get more things. Instead, they are the pushing aside of things so that we can find Connection again.

Enough includes money as well. Once you’ve established how much money is Enough, you can know that money beyond that is Surplus. In fact, we know what to do with Surplus – share it! Share it any way you like: use it to pay bills for a friend, so that they have Enough time to rest. Use it to provide food for others who don’t have Enough, or who have food that is not nourishing. Use it to support farmers who provide Real food as opposed to More food. Use it to support artisans and craftspeople who are making Durable goods that will last, so that you don’t need to buy More replacements. Use it to support people and companies who work with Fair Trade practices, so that the things you have do not come at the expense of the struggling of others. Use it to support local businesses who support local producers, which supports a cycle of Connection in the community.

We can redefine the More culture. We could redefine it to mean More Community, More Connectivity-Without-Electronics, More Compassion, More Quality. More Sharing, More Caring-About-The-Lives-Of-Others. There are so many things; we could redefine More these ways, and we would all still have Enough. We’d have More than Enough!