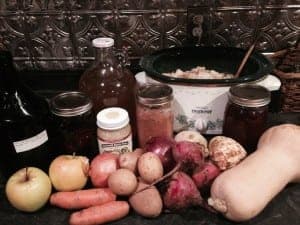 Each year, our students do projects related to food, lifestyle, sleep, and more. All of our students do these projects, though they vary slightly from group to group. We do them each year too, different projects with different groups so that we can be in solidarity with each of them. When the Second Year students – students in our Advanced Studies program who are working towards their clinical internships – do their food projects, we do it with them. And that time is now!

The Food Project with the Second Year students has this as a starting guideline, though by this time most of our students have already implemented many of the things on this list as they’ve studied them, and are able to do more creative projects.

For the next month, I’ll share with you our project: Local Farmers Only!

First, a restriction – Farmers to You has some partnerships that allow them to provide things that don’t grow locally but which are fair trade and small-farm produced. Which is awesome, but we won’t be purchasing any of those items this month – no delicious currants from NY and no gluten free/dairy free handmade lemon thyme pasta, sadly, despite that half of the six ingredients are from Vermont! We’ll eat some in March, perhaps! This month, we’ll only be purchasing items that are 100% Vermontly farmed from Farmers To You.

Then some allowances: We have a stock of seaweed from Maine, which wouldn’t necessarily count as local* but which we got during our last visit with Larch, and although none of it is seaweed that I personally harvested, I have done so with Micah and Larch. So I figure, that counts as local.

We have a store of local honey from a farm in Billerica, MA, which we visited, as well as some very excellent Grade C dark maple syrup from Gingerbrook Farm in Vermont. Not that we can make paleo pancakes to put it on, but a bit of honey and maple may be nice and they’re definitely locally farmed.

We spent a lot of time thinking about our herbs. The majority of our herbs, although we generally work with herbs that grow in New England, didn’t necessarily grow here. Because we teach so much, we don’t get to harvest as many herbs as we’d like, and we buy a lot of our herbs through Mountain Rose Herbs. We thought about restricting herbs to only herbs actually grown locally, but that seemed like an unreasonable outlay of funds to replicate things that already exist. We thought about letting the herbs in our practice be the ones that exist but purchasing all new local herbs for our house, but that also felt a little bit wasteful. So we’re going to let herbs slide.

We will take the standard “Marco Polo” exception for salt and pepper. Although, I hear that you can get Maine harvested sea salt, and this is a good time to check that out! I suppose our supplements also fit in this category – we take Jarrow vitamin D, Trace Minerals Research Magnesium, and currently I’m taking a B complex, also from Jarrow. We’re not big supplement people, but that’s sort of the minimum New England requirement this time of year.

We have some mead leftover from the wedding, which we made ourselves using the local honey, so that’s fair game too.

And that’s it!
If you’re wondering what exactly this all actually means, how about a tour of our kitchen?

As I type this, I’m rendering lard in the crockpot. Super local means no olive oil, and no grassfed ghee. I spent a lot of the last month planning for fat – which might sound crazy. But fat is a very essential part of the diet, and we eat a lot of it. When you can’t just reach for the bottle of olive oil, or the jar of ghee, things become more complicated! (I admit that I considered a ghee exception…) I got a few big slabs of pork back fat from Chestnut Farm, as well as a package of leaf lard, and chopped it all small to melt it down in the crockpot. Lard itself doesn’t have much flavor, so I’m also putting in rosemary, sage, thyme, and garlic. (Some of the rosemary is from the plant on the counter, and the garlic is local.)
I’m saving every bit of fat from cooking roasts in the crockpot – once everything cools and the layer of fat forms on top, I’m scooping it out to use later in cooking vegetables. We also have some bacon grease saved up from the last batch of Chestnut Farm bacon!

Besides the seaweed, honey, maple syrup, mead, and herbs I already mentioned, we also have:

And that’s it. We’ll receive intermittent deliveries from the farms, and all these things will get turned into delicious foods! It’s going to be a delicious month!

Yes, I will absolutely miss paleo blueberry muffins, and my waffle iron will feel super neglected because I’ve been a paleo waffle making fiend lately, it’s true. And I’m keeping a package of two Justin’s Dark Peanut Butter Cups on my dresser, so that when I’m grumpily craving treats I can remember that I’m choosing to do this project, I’m excited about it, and I’m not actually deprived! The store of foods I have to work with, and the foods that will be arriving over the course of the month, are amazing, healthy, tasty, and we are so fortunate to have them! I’m looking forward to a month of gratitude for things that are real, as opposed to the “eating a bunch of gluten free junk sugar” that has been creeping into the corners of our lives. Don’t get me wrong: I have indeed ever been genuinely grateful for Three Sisters Cocoa Snapz gluten free cereal and a bottle of almond milk. But there’s no food there, only sugar, and the gratification that comes of it is fleeting.

So that’s our project. One last thing – I’d like to thank, by name, the farmers who have produced our food this month:

want to see how we did? here are the update posts!
week one update
middle-of-the-project update
last day update