Mineral deficiency is rampant in our society – depleted soils mean that our fruits and vegetables don’t have the same mineral content that they once had. But additionally, we no longer favor mineral-rich foods in our diets: organ meats, seaweed, and bone broths are not exactly staples in most families’ menus! They should be! This series will focus on some great ways to get these critical (but maybe not entirely appealing) foods into your life.

Bone broth may be the easiest to start with, because it is most familiar. If you feel nervous about the flavors of seaweed or liver, chicken broth is at least familiar, with an agreeable flavor most people like – or can at least manage! Not only that, but it’s made with stuff you would usually throw away – bonus for your budget!

Chicken bones, from a good quality chicken. It doesn’t matter what you use for bones – if you roasted a whole chicken, use the entire leftover carcass once you’ve picked all the meat off. Any bits of leftover fat, meat, connective tissue, etc, is just a bonus for your soup! If you don’t have a whole carcass, you can still make broth: save whatever bones you have – legs, thighs, wings: they’ll all work! (For that matter, any bones, especially marrow bones, from any animal will work, so feel free to use those pork chop bones, rib bones, roast bones, whatever you’ve got! You can use fish bones too – and fish heads, crab exoskeletons… You can toss them all in together, or separate them according to the animal they came from, whichever you prefer. I separate fish bones, poultry bones, and land-animal bones, but in those categories i mix together whatever i have.)

Water – ideally filtered water. Since this is food, it’s better not to use tap water, unless you’re blessed with a good quality well.

Apple Cider Vinegar, to help the minerals out of the bones. You don’t need much, a tablespoon or so is sufficient. You just want to raise the acidity of the water somewhat, because it will pull more minerals from the bones. If you like the flavor though, feel free to add more! You can put in some Fire Cider to get a little kick, or some leftover kimchi juice as well.

That’s all you really need! If you want to get fancy, you can put in mushrooms (we like shiitake or maitake), vegetable ends (the tops of carrots, etc), and seaweed – this is a great way to ease yourself into eating seaweed! We buy seaweed from Atlantic Holdfast – this stuff is the best you can get! Garlic is a great addition, especially if you’re fighting off illness, and you can add whatever other seasoning is appealing to you, as well. 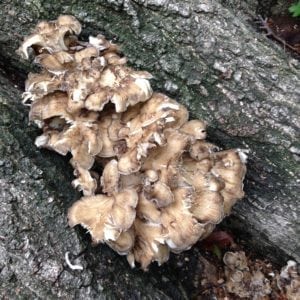 Maitake is a wonderful nutritive and immune modulator, making it a solid addition to bone broth.

Generally, my pot also has a few hands-full of root herbs as well: I particularly like to add a big handful of Codonopsis for the endocrine and immune support (not to mention its super-nourishing power!), Astragalus for immune system support, and Burdock and Dandelion for their great liver benefits. You can order these all at mountainroseherbs.com, and just toss the dried chopped or sliced bits right into the soup. They’ll boil up and once you get around to eating it, they’ll be just like little bits of vegetables in your bowl. Go ahead and add green things like Nettle Leaf, Dandelion Leaf, even fresh Parsley as well for their super nutrient content!

There’s no special preparation required – just dump everything into the pot. Use enough water to cover the bones well – some of the water will boil off over time, but that’s ok, you can just add more. All that’s left to do now is boil!

To make a good bone broth, you’ve got to let it simmer for a long time. A really long time. A day or two is ideal. But it doesn’t have to be all at once! I turn mine on whenever I’m in the kitchen. I get it up to a good rolling boil a few times a day, and turn it off again when I leave. Sometimes if I’m in and out of the kitchen, I’ll leave it on simmering for a few hours. Just don’t leave it on when you leave the house! My pot stays on the stove 24/7. Here in New England, we don’t have to worry too much about leaving food out – our climate isn’t such that it really encourages quick spoilage. If you live in the south, you might not get away with that: just put the whole pot, bones and all, into the fridge whenever you aren’t cooking it.

Once it’s boiled for several hours, you can already start eating it. We always have a pot on the stove, and try to drink a cup of broth with each meal, letting it come to a rolling boil each time before serving. Every so often I’ll put some more water in, and occasionally I might toss in extra bones too. Ideally, you want the chicken bones to get crumbly – soft enough that you can snap them with one hand. (If you’re souping beef bones, you might not get that far.) A pot of soup usually lasts us four or five days, once it’s ready: I’ll add extra water a time or two. Once I feel like we’ve gotten everything out of the bones there is to get, I put them in the compost and start over.

In our house, we like the broth just plain, with a bit of organic long-fermented miso paste and a handful of seaweed. You can also use this broth as the base for other soups or stews – whatever you like! No matter how you get it in you, it’s chock-full of minerals your body can easily assimilate!