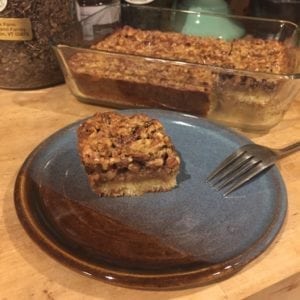 OMG, these are delicious!
This all started because I saw a recipe for Paleo Pecan Bars, and I was excited! Delicious, I thought! But there was a lot of stuff in there that just wasn’t food, in the name of “it’s not really sugar”, and there was a ton of cream and butter – two things that just don’t work for me. Plus, there were just a TON of ingredients, and I don’t like to cook that way.
So I thought, that’s a pretty picture, I bet I could make that with what I have in my kitchen, and I tried it. (by which I mean, I blew off what I was actually going to do this afternoon to bake tasty treats. yum!)

They came out great! They do have sugar in the form of brown rice syrup (maple could be substituted if you like it better or don’t have brown rice syrup), maple syrup, and some organic cane sugar in the sweetened condensed coconut milk. You can make sweetened condensed coconut milk pretty easily on your own using honey, but I had a can so I opted to go for it.

Those are sugar, so this isn’t Whole30 compliant, but it wouldn’t be anyway because it’s desert. And, in general, if I’m going to make a sweet treat, I’d much rather put a small amount of real food sugar in than put some kind of fake sweetener. For me, real food is more important than low-carb. That’s personal preference, and if you need to count carbs, definitely substitute whatever works for you!

The amounts are estimates (because that’s just how I roll, despite attempts to measure more strictly!), and it made a small batch – a 6×8 pyrex dish.

Mix well; you should have a fairly thick dough.
Liberally oil a glass dish – I used coconut oil, and there was enough that as I pressed the dough into the dish, some of the coconut oil came up over the edge of the dough, which was handy so that the spatula didn’t stick to the dough!

Combine everything into a pan and whisk continuously from the moment you turn on the heat. Don’t let it boil. As it starts to thicken, taste occasionally – you can add more sweet if you like. Once you’ve got the flavor just how you like it (salted caramel is a good target), add 6 ounces of chopped pecans. Stir well.

Pour onto the crust, and bake some more, still at 350 – about 20 minutes in my oven. You’ll know it’s done when it looks like the picture 🙂
(the crust will be golden, the top will be firm)

PS: if you bake this in a pie plate instead, it would just be pecan pie!