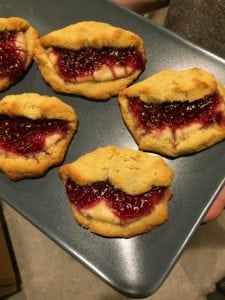 These Raspberry Cream Cheese Danishes are exactly what you need.

Because I wanted to stay as low-carb as possible, I chose to go with almond flour for this recipe, which makes a much denser danish than you could do if you were using tapioca or rice flour. But what it lacks in flakey-pastry-ness, it more than makes up for in guilt-free deliciousness!

I also chose to forgo the sugar glaze that is usually on danishes, but you could easily add that if you aren’t avoiding white sugar – I’ll include it in the recipe so you can go either way!

To stay with the “no refined sugar” theme, you can make raspberry jam with honey as the filling. If a little bit of white sugar doesn’t bother you, just choose a commercial raspberry jam that you like. These are also great with home made cranberry sauce, home made lemon curd, or cinnamon & brown sugar filling (which my husband prefers, as he isn’t a fan of cream cheese at all).

Mix well and set aside.

Mix with a fork.
Roll dough into a ball about golf-ball sized. Flatten, leaving a little bit of dough upright to be folded over later. Spoon cream cheese onto dough, and drizzle jam on top of it. Fold the upright bit of dough partway over the filling.
The cream cheese and jam filling does tend to stay where you put it, although I initially worried it would melt out of place. Yay!
Bake at 350 for about 30 minutes.

That’s all there is to it!
Makes about 10 danishes.
If you’re counting carbs, I used about a half a tablespoon of Bon Maman jam per danish, which is one of the higher-sugar jams, but it’s what I had on hand. That yields about 6 grams of sugar per danish. Total other carbs add about 3 grams of carbs per danish, so you’re at 9 grams total. Not bad for a super delicious treat!

Mix until smooth. Let danishes cool for 10-15 minutes, and drizzle glaze on with a spoon, or use an icing bag.