Elder, Sambucus canadensis, nigra, is one of our favorite herbs. You may have heard that elderberry syrup can help with the flu. You may have wondered, is that actually true? IT IS! Elderberries are chock full of vitamin C and anthocyanins, which are antioxidant. Both of these are great for supporting good health every day. But elderberries also inhibit the replication of the flu virus: which means you have fewer viruses to kill. Studies show that elderberries can reduce the symptoms and overall length of the flu, and inhibiting the ability of the viruses to replicate probably plays a big role in that. Plus, they’re DELICIOUS!

Here are three studies to get you started, if you’re interested:
Flu resolved 4 days earlier with edlerberry
Travelers were less likely to get sick, or got less sick, with elderberry
Elderberry works against gram positive and gram negative, even in a petri dish. 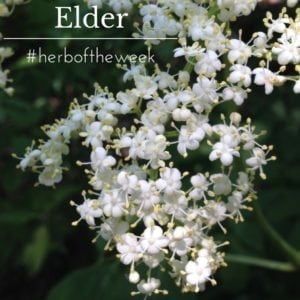 It’s not just the elder berries that are amazing: the flowers are fantastic too! A lot of people think of elderflower for fevers – they are diaphoretic, helping to release the heat of the fever, or to “sweat it out”. But elder flower has that effect on hot emotions, too! When you feel like you just can’t let go of intense emotions, or things that are upsetting you, elderflower is exactly the friend you need. You can make a tea, a tincture, an elixir, or a liqueur – you can even put elderflower in chocolate truffles! One of my favorite and fastest ways to work with elder flowers is St. Germain liqueur – just a tablespoon is really enough to have a beneficial effect on my stress levels! 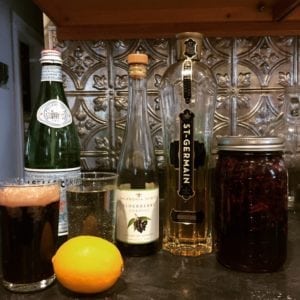 And if you want to get fancy about it, elderflower liqueur only needs some mineral water and presto – instant fancy drink! We also have been hoarding some Caledonia Spirits elderberry liqueur from Vermont, which also makes a delicious fancy drink. These are two cocktails you don’t even need a recipe for – they’re already delicious, just add fizz! If you prefer mocktails, you can simply mix fizzy water with elderberry infused honey – you’ll have all the benefits of the elder berries in a refreshing fancy drink. Of course you can get much more complex with your cocktail and mocktail recipes, but it’s nice to know that there are quick, delicious options that are stress-relieving too!

Elder has a long history, both as a medicine but also in folklore. Maud Grieve writes:

In old traditions, the Elder became the emblem of sorrow and death, and out of the legends which linger round the tree there grew up a host of superstitious fancies which still remain in the minds of simple country folk. Even in these prosaic days, one sometimes comes across a hedge-cutter who cannot bring himself to molest the rampant growth of its spreading branches for fear of being pursued by ill-luck. An old custom among gypsies forbade them using the wood to kindle their camp fires and gleaners of firewood formerly would look carefully through the faggots lest a stick of Elder should have found its way into the bundle, perhaps because the Holy Cross was believed to have been fashioned out of a giant elder tree, though probably the superstitious awe of harming the Elder descended from old heathen myths of northern Europe. In most countries, especially in Denmark, the Elder was intimately connected with magic. In its branches was supposed to dwell a dryad, Hylde-Moer, the Elder-tree Mother, who lived in the tree and watched over it. Should the tree be cut down and furniture be made of the wood, Hylde-Moer was believed to follow her property and haunt the owners.

She also writes about one of elder’s more legendary applications – as a “cure” for freckles! I’ve never been of the mind that freckles needed “curing”, but many people would prefer to be rid of them, and traditionally it was believed that elder flowers could do that:

Elderflower Water in our great-grandmothers’ days was a household word for clearing the complexion of freckles and sunburn, and keeping it in a good condition. Every lady’s toilet table possessed a bottle of the liquid, and she relied on this to keep her skin fair and white and free from blemishes, and it has not lost its reputation. Its use after sea-bathing has been recommended, and if any eruption should appear on the face as the effect of salt water, it is a good plan to use a mixture composed of Elder Flower Water with glycerine and borax, and apply it night and morning.

Elder Flowers, if placed in the water used for washing the hands and face, will both whiten and soften the skin-a convenient way being to place them in a small muslin bag. Such a bag steeped in the bathwater makes a most refreshing bath and a wellknown French doctor has stated that he considers it a fine aid in the bath in cases of irritability of the skin and nerves.

Personally, I think I’ll stick to elder flower as a stress-buster, but if you do try to be rid of your freckles with elder flower, let us know how it works!

And be sure to share YOUR favorite ways to work with elder in the comments!