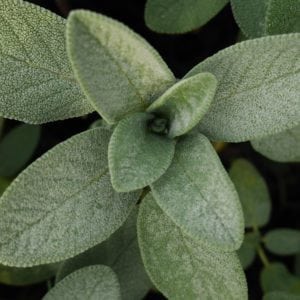 Sage is the other plant in our logo – lavender for me, and sage for ryn. Sage was one of his very first herb-of-the-month plants when he was first learning herbalism, and at the time, it wasn’t really a plant that I worked with much. I’d had a lot of teachers who revered sage, but to me it was just an ingredient in stuffing at Thanksgiving. When ryn really dug in and spent a whole month researching and working with sage, my interest was piqued!

For starters, it turns out sage tea is absolutely delicious – warm, pungent, and just a trace of bitter in the background. Over the years I’ve really come to find sage an absolutely indispensible plant in my apothecary: from digestion, to circulation, to respiratory health, and even stress management – sage is an herb you can count on! 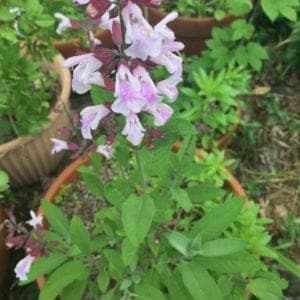 There are so many amazing aspects to sage, but my very favorite is how sage helps me deal with stress. It’s an action I found quite by accident several years ago: you may know that sage’s warming and drying action can be handy for moderating a heavy period, and having found myself in that uncomfortable condition one month, I made myself a big pot of sage tea to drink. It worked well and I didn’t really think much more about it. But the following month, although my period was pretty normal, I found myself completely craving sage tea, so I made some.

Over the next few months I started realizing that sage was helping my emotional PMS symptoms – which are usually feeling really overwhelmed and irritated. Then I started noticing that even when I wasn’t having my period, but I was feeling stressed and overwhelmed, I craved sage tea. At that point, I decided to do some research and see if anyone else had written about working with sage this way. For a long time, I didn’t find anything at all – until finally I found one sentence in a monograph written by Matt Wood, which referenced Hippocrates saying sage was excellent in cases of psychosis.

Well! I wouldn’t call my PMS symptoms “psychotic”, but the definition of “psychosis” has changed considerably in the milennia since Hippocrates – and its original definition was much more a feeling of overwhelm, disconnect, and even panicky feelings. For me this is often when I start feeling that I have too much to do and no one to help me, and even if someone offered to help me, they wouldn’t be able to – as if everything is hopeless. Well, the next time you get to feeling that way, perhaps a cup of sage tea is right for you!

Warmth Up & Dry Out 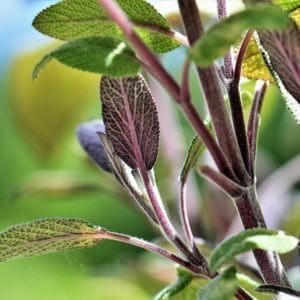 That warming action isn’t just in the guts and the circulatory system, either, but also in the respiratory system. I just love sage when it’s rainy and cold – as soon as I pour the water in the cup, I huddle right over it and breathe that sagey smell in deep. It’s warming up my respiratory tract and those volatile oils are deliciously antimicrobial to respiratory pathogens. In fact, you can have a sage steam just like a thyme steam to fight colds and flu, clear out the sinuses, and keep your lungs healthy!